What Does Ovulation Mean?

What does
ovulation mean, to the woman who is not a health professional? The quick guide
below should help you confidently answer the question “What is Ovulation?” as
well as the female hormones of the ovulation process?

Ovulation is
simply the process by which the ovary of the woman releases the egg( or the
ovum)  for possible fertilization.  At the beginning of each menstrual cycle, the “immature
egg is  contained in little structures
called follicles as seen in  the  diagram below( Number 1). As the days of the cycle approach the date of ovulation, the
follicle becomes bigger and the egg becomes marture ( Number 3). When the egg
is ready, the follicle ruptures and the egg is released as shown in  Number 4.

This  process by which the egg is released is what is called ovulation. Did you notice the little round egg within the follicles? 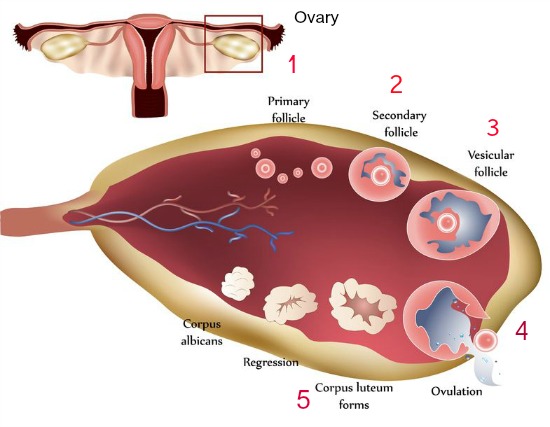 There is an
intricate interaction of the female hormones  that work harmoniously for  ovulation to occur. The details of this process are
be too complex to be  presented here. Hormones are simply chemical messengers
that tell different parts of the body to act in a particular way. You may ask,
why does the follicle release the egg at that particular day of the cycle?
Well, hormones tell it to do so! 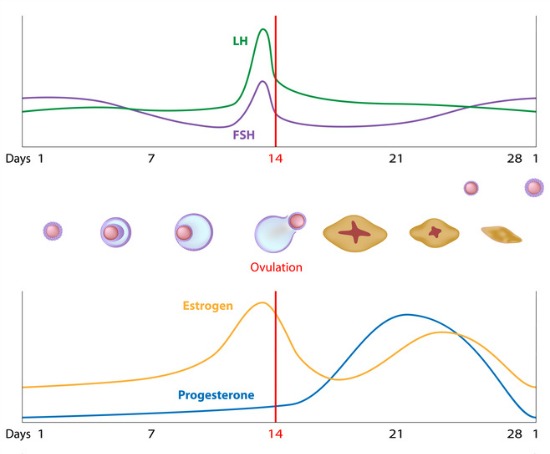 About 34 to 36h before the release of the egg,
there is a sharp rise in the amount of a hormone called Luteinizing hormone(
or LH) which gets to  its peak about 10 to 12 hours before ovulation. This is
the hormone that triggers the mechanisms that lead to the release of the egg.
That is why LH  measured in the urine
is  used as a test for ovulation. See
ovulation kits.

When Am I Ovulating?

The ovulation date is the most sought-after  date of all the days of the menstrual cycle,
especially amongst women who are  trying to conceive, or even avoiding pregnancy. Reliable  determine the period of you cycle  when you are ovulating!

Is ovulation a process that takes a few hours or a day? Few days or one week? Read How long does ovulation last? to learn to know how long it takes for the egg to be released.

Still not having all the answers to What does ovulation mean? Contact Doc!

Return from What Does Ovulation Mean to Menstruation Home