Ovulation Cycle Basics For You

The ovulation cycle is a major physiological process in a woman’s body.

There is more to this cycle than the obvious monthly menstrual flow which you are probably familiar with!

It is also called the menstrual cycle, menstruation cycle, female fertility cycle, ovarian cycle or the female reproductive cycle. Colloquially, many women call it the ‘monthlies’.

This article reviews the basics of the menstruation cycle which I have found useful in my years of educating woman on menstruation topics.

The ovulation cycle is a series of normal (physiological) changes occurring in a woman’s body, most remarkable in the genital organs, in view of normal reproduction. The cycle is geared towards preparing the female body for the conception of a pregnancy. It is a prerequisite for normal fertility in a woman. 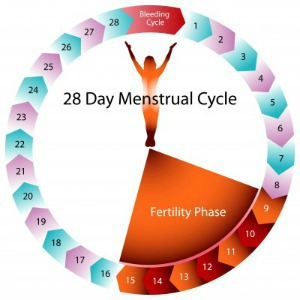 Many synonyms exist for the ovulation cycle, such as the menstrual cycle, menstruation cycle, monthly cycle and fertility cycle. This may be partly because there are many processes going on within the cycle and each of these appellations focuses on a particular aspect of it.

Menstrual cycle changes are body changes that occur as the cycle progresses. As noted above, the most remarkable of all the changes is the outburst of menstrual blood during the menstrual phase. However,
there are many other changes occurring in the ovaries, the tubes, cervix and other non-genital organs like the breasts and the skin.Some women may also experience some subtle changes in their sexual desire and attractiveness at specific phases of the cycle.

What Causes The Ovulation Cycle Changes?

The body changes might be appealing. However, there are processes “behind-the-screen” producing these florid changes. The main “players” behind these processes are the menstrual hormones. Hormonal changes
precede and produce the body changes.

What are hormones? Answer is quite simple. They are chemicals that act as messengers in the body. They are produced by one organ of the body and carry a specific message to another organ of the body. Think of a mail delivery man. Each mail he delivers carries a specific message. Imagine one of these mails contain a specific instruction for the receiver of the mail to give a certain amount of money to the mail delivery man. When the receiver receives the mail and reads it, he then carries out the instructions contained in the mail. This is simplistic illustration of the way hormones work in
the body. They carry a specific message from one organ to another and cause the receiving organ to undergo the changes specified by the message delivered by the hormone.

There are 5 hormones involved in the processes of the ovulation cycle. They are

The different changes that occur during the ovulation cycle occur in phases. For simplicity and better understanding, the cycle is divided traditionally into 4 phases: menstrual (menstruation), follicular,
ovulation and luteal.

3. Ovulation phase . This is the short interval between the luteal and follicular phases. Ovulation is the release of the ovum or egg from the developing follicles in the ovaries. It is the central process of the fertility cycle and therefore receives its due attention amongst many women.

4. Luteal Phase. This is the phase between ovulation and the next menses and occupies Days 15 through Day 28 of the 28-day cycle. It normally lasts 12 to 16 days,
with an average of 14 days. A Luteal phase length of at least 10 days is required for maintenance of an early pregnancy.

Abnormalities of the menstrual cycle are common and may affect the cycle length, regularity or any of the different phases. Common problems include absent menses, menstrual cramps, heavy bleeding and premenstrual syndrome.